My husband Rex was a brilliant set designer. He did his best work in the scene shop behind the theatre at Cal State Dominguez Hills, where we worked together for 25 years.

The shop was 50 x 100 feet with 30 foot ceilings, and every inch had a designated purpose. There was a long work bench along the north wall with power saws spinning, and the smell of sawdust everywhere. To me it sounded like a dentist’s office, but to Rex it was wonderland and he was in his glory. He was proud to be working with students and helping them build the sets he’d designed. When it was all put together I’d find him alone on stage, hanging from a cherry picker to touch up the paint. 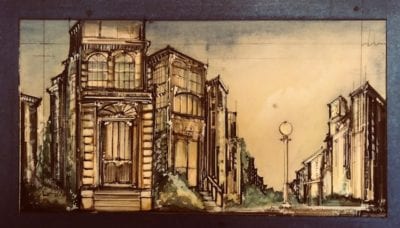 I loved coming into the shop to check on a set for a show I was directing. I’d call out his name and my voice would echo in the large concrete room. When he saw me, Rex’s face would light up. He’d always stop what he was doing and take a break. We’d go outside to catch up on our day, laugh about the students who were driving us nuts, and enjoy a high octane cup of coffee. Soon he’d go back to work and get lost again in the thing he loved more than anything in the world.

It was fascinating to watch Rex work, especially when he was painting a backdrop. There was a paint frame along the east wall of the shop. He hung the muslin for his drop along the top of the frame. With a push of a button, the frame would go up so he could reach the bottom with his brush. With another push of the button the frame went down, so he could paint along the top. 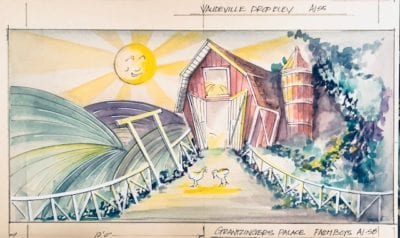 He usually had students working the paint frame. They loved watching him transform a piece of muslin into a masterpiece. It could be the skyline of New York for Guys and Dolls, a sunny field with bales of hay for Oklahoma, or a quaint New England villiage complete with church and steeple for our favorite, Our Town.

I was one of the few who knew his secret weapon. Rex used a spray gun to create highlights and shadows. He used it with the focus of an orchestra conductor. He’d draw an outline of the scenery on the canvas, while a student mixed paint at the sink near the frame. Then he’d lay in the details, grab his gun and off he’d go. My husband was John Wayne of the paint frame, spraying in subtleties of color like he was waving a magic wand. 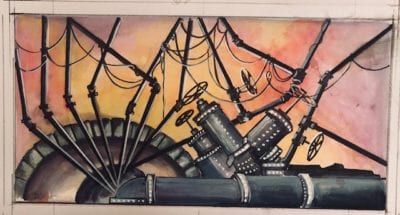 Rex was a genius, there’s no argument there. His need to create beautiful art was unrelenting. But like most geniuses, he had little concern for his own well-being while he was working. The hours he spent spraying paint on canvas without a mask, are too numerous to recount. And in the early days, he’d have a cigarette in his hand at the same time. Spray–breathe in fumes, spray–breathe in cigarette smoke, spray– and create phenomenal art. 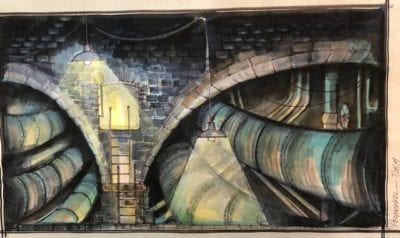 My husband’s work was astonishing, but he could have lived so much longer if he wasn’t so reckless with his health. Was that the madness of an artistic genius?  I knew I was talented, but I was jealous of Rex’s genius.  Maybe I was lucky to be spared. As the saying goes, “Talent does what it can and genius does what it must.”

And now you are gone my love and I am alone. I’m angry and sad, and I miss you every single day.