I Used to Be Pretty

I used to be pretty, I mean cheerleader, actress, head-turning pretty. Fortunately, I was also smart. I learned early that it would take more than 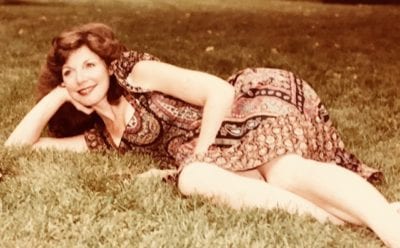 good looks to make my way in the world. And as much as I’m struggling with aging, it’s harder for women whose identities revolved around their husbands, their children and their fleeting good looks.

I always felt an urgency to craft a meaningful life.  My mother died at 44, so I knew first hand that life could be short.  I calculated the most likely path to success and pursued a Ph.D.  According to plan, I secured a tenure-track position at a state university and thought I had it all figured out. Aging wasn’t going to mess with me.

What I hadn’t figured out was how older women are treated in our society. Granted, I live in Los Angeles, the land of the young and beautiful.  But it seems to be pervasive; as women age they are often dismissed as irrelevant. “What could you say that would interest me?”  Or if you walk a little slower, the unspoken response is often, “Hurry up, get out of my way, I have things to do.” The corollary being that you, as an older woman, do not.

I retired from the university in 2011, and my husband retired in 2010. He had a history of smoking and youthful bouts of alcoholism, which aged him prematurely. He loved to go to Starbucks for a latte with whipped cream and a gooey French pastry. Since Rite Aid was only 2 stores away, stopping there before Starbucks became part of his daily routine.

Every day he’d pick up band aids, or shaving cream, or toothpaste, or whatever single item gave him an excuse to go to Rite Aid. He grew up working in the hayfields, so he never felt comfortable with the PhD’s at the university. But going to Rite Aid became his way of connecting with his “peeps.” The clerks and check-out people all loved him because he took the time to talk to them, and often had them laughing in the aisles.

As my husband’s health began to decline, so did his trips to Rite Aid. When I started picking up his medications, I was greeted with questions, advice, and many well wishes. I gave them constant updates, but when I told them he was on Hospice their pitying looks cut right through my heart. Hospice delivered his medications  at home, and I was frankly relieved that I no longer had to face his friends at Rite Aid.

On September 17, 2016, Rex died peacefully at home. Even though I was still in my 60’s, I suddenly felt terribly old. My daughter and daughter-in-law sprang into action and took over the arrangements. In Jewish law the burial should take place within 48 hours of a death, so there were a lot of preparations for the gathering at my house 2 days later. I appreciated the help of my 2 beautiful girls, but I felt useless and extraneous as the activity swirled around me.

It was several months before I went back to Rite Aid for some prescriptions of my own. I was in sloppy clothes, with no make-up, and felt about ten years older. It broke my heart to tell his “peeps” that he had passed away. They all made sympathetic remarks and couldn’t have been nicer. But something had changed. From that point on, they would always see me as “Rex’s widow.” The sad looks in their eyes made me want to run out screaming every time I bumped into someone he knew.

About 10 months ago I went into the pharmacy looking worse than I had in my entire life. Yeah, grief has a way of doing that to you. I asked for my medications hoping there would be someone at the counter that I didn’t know. Of course Linda was there, and she greeted me with those pitying eyes that seemed to say, “Oh, you poor pathetic creature, how hard it must be to be old and alone.” I know I’m projecting because she was sweet as could be, but I’d gained 15 pounds and looked like hell.

Linda put my medications on the counter and directed me to insert my card into the payment machine. The first screen came up. “Press the X in the right hand corner,” she told me, before I had even read what was on the screen. As soon as the next screen came up she blurted, “Check the box if you want a consultation.” When the 3rd screen came up, without even waiting a second, she instructed: “Sign on the bottom line and hit Next.”

This went on for several months. I know she meant well, but she prompted me on every screen before I could even read what it said. I started to feel nervous at the counter and afraid I couldn’t answer the questions on my own. Was I just a feeble old lady who couldn’t even handle an ATM machine? I’d finally had enough and had to speak up. “There’s some ageism going on here. You keep feeding me directions without giving me 3 seconds to read them myself. It makes me feel so demeaned.  Please have some respect!”

I grabbed my medications, stormed out of the store, and transferred to another pharmacy.  What I really wanted to say was: “I used to be pretty! I have a PhD and I can take care of myself. Don’t you dare treat me like an old lady!” Standing on the sidewalk outside the store I began to sob. Maybe that’s who I am to the rest of the world now. The thought horrified me and I worried if I’d ever feel whole again.

Some time has passed and I’m feeling better about myself. I’ve lost 20 pounds and wear make-up and matching clothes when I go to the pharmacy. Although I’m aging like the rest of my generation, my mind is sharp and my confidence is coming back.

Instead of turning heads, I counsel people who are struggling with relationships. When I’m not working, I go to the gym, I discuss world affairs, I take classes, I get massages and I have lunch with my friends. So yes, I’ll go into Rite Aid and apologize for being rude, but my prescriptions will be  filled elsewhere.

Aging isn’t easy and neither is loss. I was married to a man who knew me completely. In his eyes I was more than just pretty, I was a deep, sensitive soul. When I reflect on the values that constitute real beauty, of course I know it’s more than just physical appearance.  Nonetheless, I sometimes I need that reminder to face the future with courage and hope.