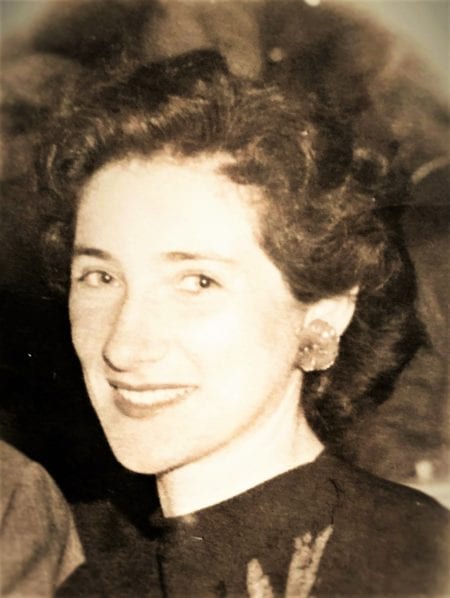 Losing a mother  in childhood or adolescence leaves many unanswered questions. My mother’s story has been pieced together from faded memories, old photographs and isolated anecdotes. I hope it does justice to the woman I knew for only 14 years.

My mother was born on May 5th, 1917, in Rochester, New York. Her parents both emigrated from Eastern Europe lured by the promise of a better life. Her father, Abraham Kay (born Kosovsky), came from Minsk in 1911, and her mother, Edith Garelick, from Poland in 1913. They were married in New York City on December 22, 1913, when Abe was 19 and Edith was 17.

My mother Janet was their first child, followed three years later by Alice and by Beverly six years after that. They enjoyed a comfortable lifestyle in Rochester, New York, where Janet learned to appreciate both opera and horseback riding. She was a better than average student, but by the time she was fifteen the family moved 300 miles away to Brooklyn, New York.

Abe had been a successful salesman, and in Brooklyn he ran his own business in the garment district. Janet was pretty, poised and popular, and easily made the adjustment to life in Brooklyn. She attracted the attention of many young men and made friends quickly. She was a natural born leader and took great satisfaction in running a girls’ club for teenagers who needed a big sister.

1937, she met Milton Horowitz. He may not have been as wealthy as some of her boyfriends, but he had a great sense of humor and was smart as a whip. She was the refined, beautiful girl from Rochester falling in love with the boy from the lower east side. But Milton had just finished law school, and he showered her with attention, kept her laughing and made her feel like the most beautiful girl in the world. It was clear they were a match and they got married on March 24th, 1939, in New York City when Janet was 22 and Milt was 25. 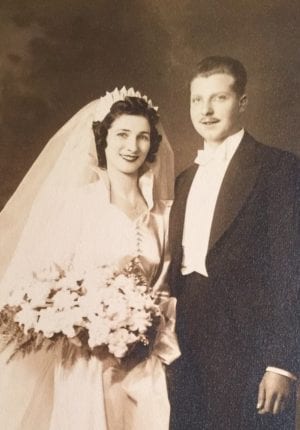 The wedding was an exquisite, formal affair with nine bridesmaids in matching silk gowns and nine groomsmen in tuxedos. Janet and Milton were both the oldest in their respective families, and her parents loved him immediately. Wages were low in 1939, but Milt got a raise to $6.00 a week as a law clerk when they got married and Janet worked as a bookkeeper. They honeymooned in Florida and returned to an apartment in the Bensonhurst neighborhood of Brooklyn.

They lived on the same block as her sister Alice and husband Jess, and they all became best friends. This made her first year as “Janet Horowitz” especially fun, and on May 6th, 1943, it got even better. One day after her 26th birthday, Nancy Roberta was born and the couple became a family. The war in Europe was escalating and Milt thought he’d be exempt from serving since he was a lawyer and had a new baby. Nevertheless, when Nancy was 6 months old Milt was drafted into the Army.

Janet followed her husband to North Carolina while he was in basic training. But when he was shipped overseas in 1944, she returned to New York and worked for the WAVES (Women Accepted for Volunteer Emergency Services). It was difficult raising her daughter alone, but when Milton returned in 1946 they went on a 2nd honeymoon to Miami Beach to celebrate.

Their 2nd daughter, Sydell Sally, was born on February 18, 1947, when Janet was 29 years old. Alice and Jess had 2 sons the same age as Janet’s daughters, so everyone shared responsibilities. It was a happy time for her, being close to family and staying home with her girls. Milt was doing well in his law practice in Manhattan, and they even snuck away on a vacation in 1951 to Toronto and Lake George, where Janet got to do some horseback riding. But when Milt bought her a mink coat she knew she had arrived. In the 1950’s it was a huge status symbol, and she was proud to be the wife of a successful lawyer.

Janet was ambitious, not only for herself but her daughters. Nancy was especially pretty, and Janet took her into Manhattan to get professional pictures so she could do some modeling. Nancy did well and when Sydell turned five, Janet got pictures for her too. But by 1952 the family was moving to the suburbs of Long Island, and going 30 miles into the city for photo shoots was just too much. The new house in Mineola was Janet’s dream, and when they moved in she couldn’t have been happier.

Although they didn’t see their families quite as often, they all still got together many times a year for the Jewish holidays. There were always at least 20 around the table, the food was plentiful and the atmosphere warm. Once Janet settled into suburban life, she and Milt got involved in the building of a new synagogue. My mother became President of the Sisterhood and began volunteering at many charitable organizations. She was a candy striper at Long Island Jewish Hospital and became President of the local chapter of The United Cerebral Palsy Association. She was great at organizing meetings and events, and loved entertaining friends at her home.

On a December morning in 1954, however, she got a phone call that rocked her world. Her father, Abraham Kay, had been found dead in his factory. They assumed it was a heart attack, but when they arrived the next morning he was hanging from a rope. It was clear that Abe had committed suicide. Was he embezzling money from the business? Was ending his life the only way he could see out? Or was there a long term issue with depression? This was traumatic for Janet, who adored her father. Nonetheless, she fought to maintain a façade and kept the shameful secret from everyone she knew.

There is a lot written about the relationship between mind and body when it comes to disease. Could the trauma of her father’s suicide have activated a dormant genetic anomaly? Regardless of the root cause, in February of 1956, when Janet was 38 years old, she was diagnosed with Breast Cancer. She was a no-nonsense woman, and matter of factly told her daughters that she was going into the hospital to have a breast removed. Nancy was 12 and Sydell was 8, but the word “cancer” was never used, and she reassured them that everything would be fine.

Janet recovered well and life continued as if nothing had gone wrong. To help other women who’d had the same surgery, she visited them in the hospital to encourage them to get well. There was no chemotherapy in those days, and radiation was only done sporadically. Janet continued her normal routine and several months later the whole family went on a vacation to Washington D.C. It was a great trip where everyone had fun, and no mention was made of her recent mastectomy.

But by 1957, there was a lump in the other breast. The doctor told Milt that it was probably the breast cancer coming back, but to remove her other breast would be too upsetting. Without including Janet, the doctor and Milt chose to treat it with radiation and avoid further surgery. I know it’s astounding by today’s standards, but in those days husbands made decisions for their wives. They often decided if the wife should even be told the truth about her diagnosis. Janet was not told.

By the end of 1958 the atmosphere around the home changed as the cancer silently progressed. Janet’s health and state of mind were both unpredictable. She was in and out of the hospital, one day quite ill, and the next getting dressed in nylons and heels to attend a Charity Luncheon. On her bad days she was short tempered and frequently irritated by her daughters, who were also kept from the truth. She yelled at them, and seemed to blow up over the smallest infractions. On her good days, however, she would play her opera records and bustle around the house. She continued to get her long beautiful nails manicured in her signature bright red, and she also remained ambitious for her girls.

In 1959, she took 12 year old Sydell into Manhattan to enroll her in the American Academy of Dramatic Arts. Nancy had been the model, but Sydell would be the actress. Going alone on the train into the city was fun for Sydell and kept her distracted from what was going on at home. Janet was weakening, but she still had her good days.

She was proud of her daughters, and enjoyed planning Sydell’s Bat Mitzvah in February of 1960. At 42, she remained a gracious hostess and looked beautiful at the party. In some of the pictures one of her eyes seems to be closing. The cancer had reached her brain by that time, and nobody said a word. Several months later when Janet became so sick she had to be rushed to the hospital, the cover up continued. It was hepatitis, she was told, and everyone went along.

By February of 1961, Janet had more bad days than good. But she and Milt celebrated the 5 year anniversary of her mastectomy, as evidence that she was cancer free and getting well. But by May, she had taken a turn for the worse. One afternoon, she got out of bed to go to the bathroom and was so weak that she fell right there on the floor. Sydell called in a  neighbor to help her up and Milt subsequently hired a nurse’s aide to assist during the day. No conversation took place in the family. Milt went to work and the girls went to school, and it was never acknowledged that she was dying of cancer.

Inevitably, on May 26th, 1961, just weeks after turning 44, Janet Kay Horowitz passed away. She left two daughters, then 14 and 18, with no explanation or words of goodbye. Did she know she was dying? Did she know that the cancer had returned in 1957? Or was the need to be strong more important than the truth? Cancer was whispered about in those days, and breast cancer in particular was stigmatized as a curse. There were no marathons, pink ribbons or celebrities trumpeting their cause. There were only secrets and lies. And in that environment the life of my mother was cut short.

Just as illness was kept secret in the 1950’s, so was grief. After she died, my father  couldn’t talk about her, so my sister and I followed suit. The memories faded and the subject became taboo. But her life mattered and she deserves to be remembered. Janet Kay Horowitz was a beauty in her youth, a leader in her community, ambitious for her children and a proud and loving wife. My mother was tall and slim and always confident in social situations. She loved her parents, her sisters and their children, and was equally warm to her husband’s extended family. She was strong and efficient, always looked her best and did what was expected. I remember her cooking dinner every night in high heels and dresses and she never complained about it.

My mother left behind a beautiful legacy. Her husband of 22 years found love again and continued to make people laugh. Nancy had 3 children, all of whom distinguished themselves in their careers, and 4 grandchildren that Janet would have loved.

I became a Drama Professor, thanks to my mother’s push, and then a Marriage and Family Therapist. My son is a rabbi, a hospital chaplain and a leader in his community. My daughter has the poise and confidence of her grandmother, with a successful career to boot. Between the two of them I have 6 amazing grandchildren. Janet Horowitz’s life was all too short, but   as her youngest daughter, I will always honor her memory.

To write your mother’s story, go to: http://www.mymothersstory.org

To View this story on the website go to: